These are just so freakin' good...and worth every ounce of indulgence.  These brownies just melt in your mouth.  And can we talk about the corner of the brownies?  They're crispy on the outside and gooey and decadent on the inside.  It's a killer combination.

Brownies are a weakness of mine.  Both kiddos still refer to any dessert as brownies.  I'd like to tell you it's because I make them all the time but I think it has more to do with Connor being in love with the brownies at California Tortilla since he was a baby.  Despite us trying to now transition them to refer to desserts by their proper name, "brownie" is still the catch-all phrase for all things dessert, which makes it really confusing when I'm making actual brownies.  And secret confession: I find myself referring to dessert as brownies <<face plant>>.  California Tortilla has nothing on these brownies.

These chocolate raspberry brownies don't take long to make from scratch either, so don't be shy if you've never made brownies from scratch.  They're way better than boxed brownies if you can't believe it...and I love me some boxed brownies.

This creation was inspired by Diane Morrissey, who makes you instantly hungry in a matter of seconds after looking at her food on Insta. 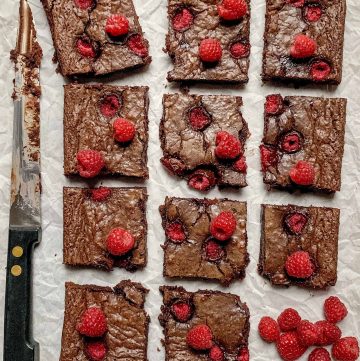 Store at room temperature in an airtight container.  They'll be great for 3-4 days.