Talk about a budget-friendly, delicious breakfast -- these Homemade Hash Browns are a perfectly crispy accompaniment to any breakfast!

When John and I first started dating, he was enamored with many things from the South, Waffle House being one. Every time we'd head South to visit my folks, he'd always want to eat there, and all I could think about was how different an experience Waffle House would be years later, stone-cold sober at 11 am on a Saturday. I think I have only let us eat there a couple of times since, but I now regret that decision because time away from the South means I miss some good ole comfort food -- like Waffle House hash browns.

These are the homemade kind -- and they're so crazy easy you won't need those frozen hash browns anymore. These hash browns require just Russet potatoes and a couple of ordinary spices and can be made in about 15 minutes total. They're also a slightly healthier version because I've subbed out vegetable oil or canola oil for olive oil and soak up excess olive oil with a paper towel right before serving.

How to Make Homemade Hash Browns

Using the largest holes of a cheese grater, shred your peeled potatoes into small pieces. Then place the shredded potatoes in a bowl and rinse with water. This will wash the excess starch from the potatoes. Then, working in small batches, squeeze the potatoes as dry as possible with paper towels. This will ensure the potatoes get crispy and not mushy.

Mix salt, pepper, and garlic powder in with the potatoes to give the potatoes additional flavor and interest.

You'll place the potatoes in an even layer in a non-stick or cast iron skillet over medium to medium-heat (I fry with the stove on a 6-7/10) with olive oil. Use a spatula to flatten the hash browns a bit so they start to brown. Don't touch them for 2 minutes once the potatoes are flattened. Then mix them up and flatten potatoes again. Do this a couple of times until your hash browns are nice and brown and stick together. Flip over one more time to ensure the other side also gets crispy.

How to Shred Potatoes for Hash Browns

Use the largest holes of a boxed cheese grater. This will be the perfect thickness for your hash browns.

No one likes mushy hash browns. Here are some quick tips to ensure yours become golden and crispy:

If you're not from the South, you may not know this, but at Waffle House, there are numerous ways to order your hash browns. The AJC even has a whole guide dedicated to hash browns options. If you're unfamiliar, here's a cheat sheet of just some of the most popular ways you can spice up your hash browns (all of which are easy to do at home):

Smothered and covered was always my personal favorite. What's yours? 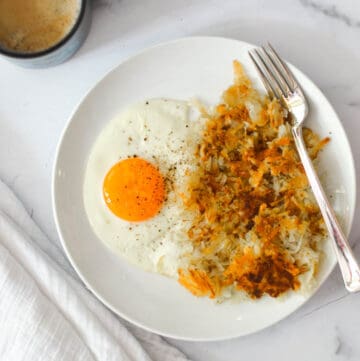