Pomme puree (called "fancy mashed potatoes" in our house) is as creamy, buttery, and rich as it looks -- and is the best side dish under your favorite meat or fish. 5 star restaurants, watch out!

As an Amazon Associate I earn from qualifying purchases. This comes at no cost to you though! Thank you for your support!

You can make these mashed potatoes right in your own home, and I'm just going to say it: they're WAY better than your standard mashed potatoes. Pomme puree requires more steps than your regular mashed potatoes, but these extra steps are SO worth it, especially for celebratory dinners (think: birthday parties, anniversaries, Thanksgiving, Christmas...). You need just a couple of ingredients, a couple of kitchen tools, and 15 minutes of hands-on time.

What is Pomme Puree?

Not going to lie. The first time I read pomme puree on a menu, I thought they were serving apple sauce and considered ordering it for my child. High school French didn't prepare me for this one.

I took some liberties to do two things out of the ordinary from the typical French preparation and my sole reason for doing so was health:

The recipe calls for using a ricer (what I use) or food mill. If you don't have either, you can always use a cheese grater (the small holes) but it'll take you a bit longer. You'll need to put some extra elbow grease in.

Make Pomme Puree Ahead of Time

Pomme puree is excellent re-heated. I think it's something about using the immersion blender at the very end that binds the butter with the potatoes because there is zero separation when the potatoes are put in the refrigerator overnight.

To re-heat normally: Place potatoes in an oven-safe casserole dish. Reheat at 300˚F for 25-30 minutes.

For a crusty top: Place potatoes in an oven-safe casserole dish. Reheat at 400˚F for 30 minutes. You can even stick under the broiler for another 1-2 minutes to get an even crispier, crunchy top. It's quite delicious! 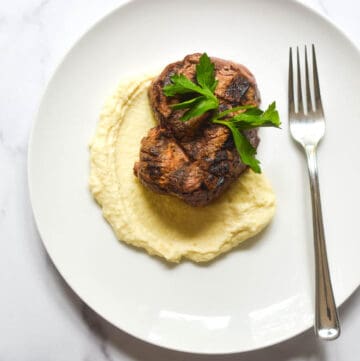 As an Amazon Associate I earn from qualifying purchases. This comes at no cost to you though! Thank you for your support!