I don't think my son loves any breakfast food more than cinnamon rolls -- and I was a little nervous he wouldn't appreciate me messing with a good thing, but he's a fan. I know you will be, too.

I definitely was one of the people who Googled this. According to Wikipedia, the most trusted name for news, the answer is quite unsatisfying.

Monkey bread is called monkey bread because it's a pull-apart bread meant to be eaten as a finger food like monkeys would consume it. By that logic, we could really name it probably anything. Squirrel bread? Gopher bread?

Want another interesting tidbit? There's a million different names for monkey bread: Christmas morning delights, monkey puzzle bread, monkey brains, sticky bread, Hungarian coffee cake, golden dumpling coffee cake, pinch-me cake, pluck-it cake, bubble loaf and funky bread. I feel like some of those are made up, but whatever you call it, it's just plain delicious.

What Kind of Cinnamon Rolls Should I Use?

You can use any kind of pre-made refrigerated cinnamon rolls. I had a roll of Pillsbury Grand rolls and another tube of their regular-sized cinnamon rolls -- so that's what I used most recently, but it doesn't really matter. Use whatever you have on hand.

The Grand rolls are a bit larger, and I liked having some smaller pieces with some larger ones by doing a combo, so I'll probably keep doing that.

How to Make Cinnamon Pull Apart Bread (or Monkey Bread)

These are much easier to cut when they are fresh out of the refrigerator (the colder the better). If some of the pieces fall apart, no problem. Include them anyway.

Step 2: Roll each quarter in sugar and cinnamon and place in greased bundt pan.

Even more sugar. The butter/brown sugar mixture acts as the glue to bind the pieces of cinnamon rolls into the bundt pan. You'll bake at 400˚F for about 20 minutes. Drizzle the icing that comes with the cinnamon rolls on top. I put the icing into a small plastic bag and cut the tip off one of the corners and "pipe" it on that way. You can easily use a spoon if you don't want to bother.

Turning The Monkey Bread Over

I promise you -- 10 minutes is the perfect amount of time for the monkey bread to set but not too much time that the cake starts to stick to the sides, which is obviously not ideal.

So set your timer for 10 minutes and flip your monkey bread onto a platter when the alarm goes off. You'll thank me later! 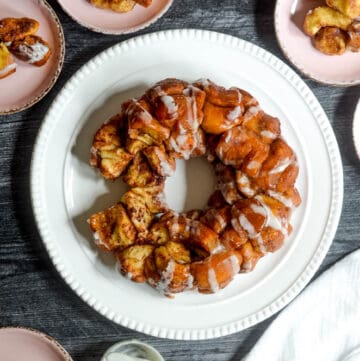 This monkey bread is best enjoyed as soon as it comes out of the oven!  The cinnamon rolls dry out quickly.  If you want to make in advance, cut cinnamon rolls and roll in cinnamon and sugar. Save the rest until just before you're ready to bake.