These Kahlua brownies with Kahlua Whipped Cream use boxed brownie mix and involve a 5 minute whipped cream. What's not to like!?

These brownies aren't rocket science, but they are a HUGE hit with everyone. They involve brownie mix that's doctored up with a bit of booze (enter Kahlua) then topped with a whipped cream Kahlua frosting. I mean -- what more is there to ask for?

I have already written extensively on how I've given up making brownies from scratch in the post for Brownie Pizza Cake with Fresh Berries and Whipped Cream, but suffice it to say brownie mix reigns supreme over in our house. Don't be scared to use the boxed mix.

Kahlua is a coffee liqueur from Veracruz Mexico -- comprised of rum, sugar, and 100% Arabica coffee. It has 20% alcohol by volume, so it's less than straight up rum but it has more alcohol than Baileys. (Another difference between Kahlua and Baileys is that Baileys has some additional creaminess than Kahlua doesn't have.)

It's a natural pairing with chocolate because coffee accentuates the flavor of chocolate.

In these Kahlua brownies, the Kahlua is going to replace the water in your brownie mix. Consult the back of the package to make sure, but most brownie mixes require ⅓ cup of water. Instead, use ⅓ cup of Kahlua.

Our favorite brownie mix is Ghirardelli and we can buy the mixes in bulk at Costco, but Duncan Hines also has a pretty mean mix, too. Use whatever you have on hand and prefer the most. It's more of a personal preference!

Do you like cake-like or the extra fudgy ones? These can be adapted for either kind!

Tips for Making These Brownies

Do you use the term frosting or icing? Are these two terms interchangeable? I don't even know.

Start by whipping the heavy cream until the cream starts coming together. Then gradually add your confectioner's sugar (powdered sugar), then Kahlua, then vanilla extract. Stop when your cream reaches stiff peaks.

You should be able to pull the whisk out of your frosting from the stand mixer and the frosting should stick straight up like a mountain. 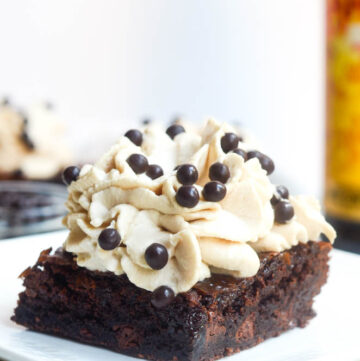 For the whipped cream: