This creamy Ham and Potato Soup is comforting and healthy -- with bits of ham and vegetables in every bite!

You know what I really love on a cold winter's night? A nice warm bowl of healthy soup with a hunk of toasted baguette. I say healthy because I don't want to feel icky after eating soup -- which is how I feel after eating a lot of cream-based soups. Don't get me wrong -- I love them (especially a creamy mushroom soup) but they don't always love me. This Ham and Potato Soup is one of my new favorites -- and has nothing but ham, vegetables, broth, and cannellini beans in every bite.

If you ate ham for Christmas dinner like we did, this is THE perfect recipe to utilize the hambone. The bone of the ham has so much flavor just waiting to be released when it simmers in a large pot of water. DON'T THROW IT OUT! I beg you! Don't do it! If you don't have a ham bone, no worries. We'll talk more below.

How to Make Ham Stock

To make ham stock or ham broth, just place the entire bone (and whatever meat is still attached...leave it) in a large stockpot and fill with water until about half the bone is covered. This will be about 7-8 cups of water.

Bring the water to a boil then lower the heat to a simmer. Simmer uncovered for 45 minutes to an hour. (Note: Make sure the ham bone is simmering not boiling for that long. You don't want to reduce the liquid significantly, you just want the bone and meat to flavor the broth.)

Then discard the bone and any large pieces of meat that may have fallen off. Save the broth to use in this soup! You'll use all of it.

If you don't have any ham stock or both or don't have the bone to make your own homemade ham stock, use either chicken stock or vegetable stock. It'll still taste absolutely delicious -- you just won't have as strong of a ham flavor.

Here's what you'll need to make this soup:

The Trick to Creamy Soup Without Using Cream or Milk

There's actually two things -- one secret ingredient and one secret "technique," of sorts. The secret ingredient is adding an extra potato. Potatoes are naturally creamy and while I still want to taste chunks of potato, I can let the other potato blend with the soup to make the broth luxurious and creamy without any dairy.

Just after adding the beans and just before adding the last two ingredients of corn and ham, I move half of the soup to my food processor or blender. I blend the soup on high for about 30 seconds to a minute until it's well combined. Then add the creamy mixture back in to the rest of the soup.

I use this same method in my Carrot and Ginger Soup and my Corn and Zucchini Chowder.

Love is a warm bowl of soup! 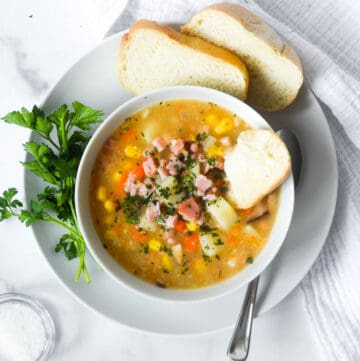 *Homemade ham stock or ham broth is very easy to make. Place ham bone in a large stock pot and fill with water until the bone is halfway submerged. Bring water to a boil, them reduce heat to a simmer. Simmer for 45 minutes-1 hour. You'll use all of the ham stock produced here in the soup (about 7-8 cups).    This soup is delicious the next day. Place in a sealed container in the refrigerator. To reheat, place the soup in a saucepan and heat on medium until the soup is warmed, about 15 minutes.
« Healthier Pineapple Chicken Stir Fry
Lemon Bundt Cake Recipe with Lemon Glaze »