These easy snickerdoodles without cream of tartar come out perfectly soft and chewy with that signature cinnamon sugar crackle on top.

Aside from the faithful chocolate chip cookie, I don't know another cookies that uses only the most basic of ingredients to create a round circle of soft and chewy deliciousness. Perfect with coffee for breakfast, a sweet treat after lunch, or crumbled with your favorite ice cream, snickerdoodles are the cookie for all times of day IMHO. The cinnamon's warm notes that make the cookie something fun to make for the holidays, but its classic flavor really makes it a cookie for all seasons just like the CCC.

If you're a snickerdoodle lover, you'll notice there's one ingredient conspicuously absent: cream of tartar. LOTS more on that below, but the bottom line is you don't need it. Here's what you will need though:

What is Cream of Tartar and Why Not Use It?

Despite its name, cream of tartar is not creamy nor is it associated with the white sauce some people dip their fish into. It's actually potassium hydrogen tartrate, which is a natural byproduct from the wine-making process. It's acidic, so it interacts with the baking soda to be a leavening agent in many baked goods. It's also used as a stabilizer in egg whites for merengue, for example.

There's a couple of different reasons some people would prefer to leave cream of tartar out of their baked goods when possible:

First, cream of tartar is not something I necessarily always keep stocked. Sure it's an ingredient in the spice aisle of every grocery store, but I use it so infrequently that one time I realized my cream of tartar expired 8 years back. I think I was trying to make homemade play dough for the kids.

Second, cream of tartar sometimes can have a tinny, metallic taste to it like you're eating the bumper of your car. If that's not enough to use it infrequently, I don't know what is. I'm not sure why this is most noticeable to me in snickerdoodles, but I don't taste this metallic taste in some other ways I use cream of tartar like in these ghost merengues.

The Ultimate Taste Test - Snickerdoodles Without Cream of Tartar or With?

Using a cream of tartar substitution (details below in the next section), DOES NOT mean your cookies will be flat or tasteless. In fact, take a look at the picture below.

The first batch I used cream of tartar and the second (this recipe) uses baking powder instead. The cookies will have that beautiful rise to them that makes the snickerdoodles soft and chewy, and they still have that signature cinnamon sugar crackle on top. The taste and texture remain unchanged.

There are a few cream of tartar replacements, and I've used the first substitution in these snickerdoodle cookies. You can use any of the following replacements, but some substitutions work best depending on what you're making:

How to Make Snickerdoodles Without Cream of Tartar

Easy as 1-2-3, you can have these cookies made and in your mouth in under 30 minutes.

Step 1: Mix your dry ingredients together.

In a medium-sized bowl, combine your flour, baking powder, baking soda, salt, and cinnamon with a whisk. Set aside because you won't need this right away.

Step 2: Cream butter and sugar together.

You want to really spend a couple minutes creaming your butter (at room temperature) with your granulated sugar until it's light and fluffy. This will help the cookies be soft and chewy.

Mix in the egg and egg yolk until just combined. The batter will still be pretty loose at this point. Be sure to scrape the sides and bottom of the bowl to make sure everything is well combined.

With the mixer on low, add the flour mixture in small batches until just combined. Don't over mix and scrape the sides of the bowl if necessary. The batter will be pretty thick. That's okay!

Using a cookie scoop to give you an even amount of dough each time, roll the dough around in your palm until you have a nice round ball. Roll in cinnamon and sugar mixture and place on a baking sheet two inches apart from one another.

Bake in a 375˚F oven for 9-10 minutes. My husband and I argue about whether 9 minutes (my vote) or 10 minutes (his) is most appropriate. I prefer a slightly under baked cookie personally. 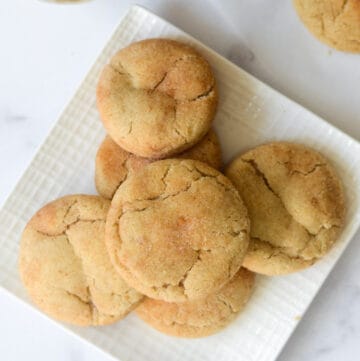 STORING: These cookies hold up really well for 2-3 days. Store in an airtight container at room temperature.  FREEZING: You can also freeze these cookies. Wrap them tightly or seal them in freezer-safe plastic bag. Cookies can be frozen for up to 3 months.
« Rainbow Bundt Cake (Using Boxed Cake Mix!)
Easy Thin Mint Brownies »