This beautiful cinnamon and sugar pull-apart bread is surprisingly simple to make (just need the time!) and perfect for breakfast or brunch on a cozy day indoors.

Can I tell you how excited I am that spring is right around the corner?  And with spring weather comes more daylight and new seasonal fruits and vegetables.  I'm trying to not wish away the next three weeks but seriously...I NEED YOU, SPRING.

I haven't posted much in awhile because things have just been busy.  Not with any one thing in particular, but the general, day-to-day busy-ness that consumes most of us.  The monotony of the "regularly scheduled programming" as we like to say.

We're under a winter storm warning tonight through early tomorrow morning, so there's a chance we'll have another snow day tomorrow or maybe just a delay.  I'm hoping (always) for a snow day though.  The time off from work acts as a bonus day with my two little loves...and this time with them is priceless.  It's become a little bit of a tradition in our house to make some kind of bread on these days together because we have no other agenda.  Waiting three times for the bread to rise in no big deal because we're consumed by movies, puzzles, and playing lava over and over again.  Plus, it's so much fun cooking with little people if you can get past the mess that always ensues.  They *love* punching the dough, kneading it like their Playdoh, and using the rolling pin.

When I saw star bread for the first time, I thought it was beautiful but never something I could do due to time constraints.  Kids, man.  Then I watched one YouTube video and realized it's easy peasy.  That makes this a great one to do for guests.  You know I'm all about the food that looks fancier than it really is.  Optics, people.  All about the optics.

How to make star bread

The pictures aren't very blog-worthy, but what I'm trying to show you is just how easy it is to make the star.  Once you've divided the dough into 4 equal pieces, this is when the fun begins.

You make four layers of dough with cinnamon and sugar in the middle.

Use a cup to make a subtle indention in the middle of the top circle. You'll then make 16 cuts (I cut the dough into quadrants then cut the quadrants into quadrants to try to make the strips as uniform as possible) starting on the circle indentation and going to the edge of the circle.

Then you gather two strips in your two hands and twist the two pieces away from each other twice and pinch them together at the ends to create a point.  Voila.   If you follow me on Instagram, you can also see in my saved stories how to make this (my 4 year old recorded me!).  You can create this 8 point beauty in a matter of minutes:

Other filling for the star bread

Think of this recipe as a base recipe, so feel free to add your own twist and favorite fillings. Here are some other options that are delicious:

Speaking of bread, here are my top five favorite breads to make in our family: 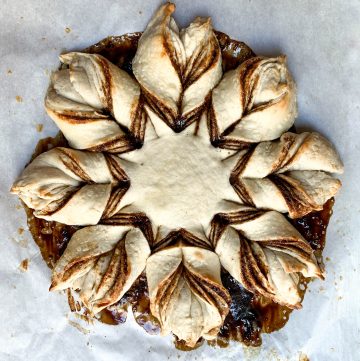